Climate change is produced by human activities, specifically by jet aircraft travel injecting moisture into the troposphere. International air traffic flies polar routes over the arctic injecting moisture in the troposphere over the arctic.
The skies have gotten dramatically cloudier with the advent of jet aircraft travel. However just the injection of the water vapor into the troposphere even in the absence of clouds causes warming!
This cloudiness caused by jet aircraft can be observed by anyone who is willing to look at the skies—scientists need to observe the actuality not just look at computer programs! One might say they had their heads in the sand (Computer chips are made from silicon–sand is silicon!), and never looking up at the sky.

NOAA Annual Arctic Report Card. December 15, 2015.
NOAA states that the arctic is warming twice as fast as any other place!

Data:
1. Water vapor is the most predominant and potent greenhouse gas.
2. Water vapor is injected into the troposphere by aircraft travel.
3. The stated computer simulations relied upon by the IPCC specifically state that cloudiness and water vapor in the atmosphere is only due to natural causes.
4. 3 is directly contradicted by 2 in the northern hemisphere. Cloudiness and water vapor is injected into the troposphere by human activity; i.e. jet aircraft travel. There has been a dramatic increase in cloudiness in the northern hemisphere by human activity.
5. Thin clouds and water vapor in the troposphere allows the short wavelengths of the sun to pass through but absorbs the long wavelengths radiated back toward space from the earth; thus warming the atmosphere and the earth.
6. Clouds keep the nights from cooling. After 9/11 airline traffic was shut down for a couple of days. The days were warmer and the nights were cooler during this shutdown illustrating the effect of jet aircraft travel. Bright blue skies on 9/12 & 9/13! This is verified by the extreme variation of day to night temperatures in very arid deserts.
7. Intercontinental flights are over the arctic injecting water vapor into the arctic troposphere thus warming the arctic. Thus the arctic warming twice as fast as any other place!
8. Since the northern hemisphere contains the majority of the population of earth, and the majority of airline traffic we really have northern hemisphere and arctic warming, not “global warming”.
In most of the United States a person can easily observe the cloudiness created by jet aircraft travel.
It seems a scientist cannot disagree with the political correct view of carbon dioxide causing the “global warming” and get research funding nor can he get published—this is the punishment for not being politically correct!
Thus the measures proposed by IPCC and the climate agreements will be totally ineffective in reducing “global warming” and will only create economic hardships. 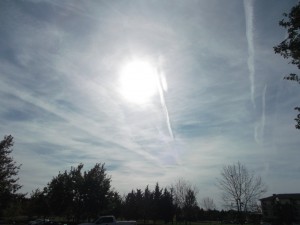